This document has been prepared for information purposes for guests of the Hotel Villa La Pierre and may not be distributed to the public. The images used in the study are the property portals and authors, they may not be copied or distributed.

Tourism
In the commune Strzegom no forms of nature such as parks, nature reserves and areas of protected landscape .Nie mean, however, that the municipality is deprived of places of interest in terms of landscape, nature and interesting historical and architectural monuments. Strzegom Municipality geographically is part of Sudeten Foreland, so it is characterized by a picturesque, hilly landscape with a dominating one side of the city of Mountain of the Cross (the highest peak Hills Strzegomskie) and river valleys Strzegomka and Pełcznica. Tourist attraction is the beautiful view of the panorama from the viewing platform at the top of the Cross Mountain (354 m asl). Moreover, in the forest complex Krzyżowa Mountain there are many walking paths and a quarry on the western side constitutes a unique attraction. This beautiful, picturesque landscape delight every stroller. 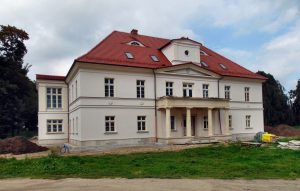 From the 17th century. rebuilt in 1830. Park with a rich stand.
Currently in private hands. 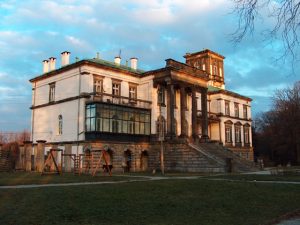 Of the 18th century. surrounded by the historic beautiful park. Currently, the stud farm and nursery Foundation of St. Jadwiga Place also known for its excellent food.

The Church of St. Peter and Paul in Russian

The Church of St. Simon and Thaddeus in rogoznica

The first mention in the r. 1291. The current building dating from about 1500 onwards. The high altar-the 17th century, the pulpit, Baroque, 18th century. Epitaphs and gravestones of sandstone from the years 1558-1677.

The Church of St. The Trinity

The ruins of the Palace in Olšany

The remnants of the ruins of the Palace which was built originally as the Foundation of the Renaissance in the 17th century, that is a thorough reconstruction in the early 18th century. Damaged in 1945, then devastated and almost completely demolished, now preserved fragment of the front wall of the portal are equipped. Survivor while the 18th-century buildings: 4 Annex, granary and impressive gateway. Around the remains of the moat and the historic park of 10 ha.